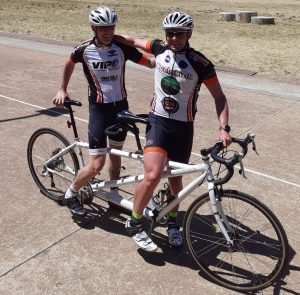 Where has Gavin (VIP-Sport) had an impact on my sporting goals and motivation?

I have a visual disability called Stardgardts disease since I was 5 years old. I have always loved competing in a variety of different sports from an early age and always strived to be the best, even competing against normal sighted individuals. Through the years I received numerous sporting awards, such as the best soccer player of the year 3 times. Over the last 10 years, however, I had to give up Motocross and started road cycling. I did quite a few races on my own such as the 94.7 Cycle Challenge and achieved respectable times for every race. Unfortunately, over the last 6 years, my disability progressed to such a level that I could no longer compete in the sports I love on an individual basis. I had some friends competing with me in the tandem category but after about 2 years I felt that I was not achieving to the best of my ability and therefore lost motivation to carry on.

Luckily, I attended a Retina SA meeting where Gavin from VIP-Sport was a speaker. He spoke about how he was able to achieve (such as the Paralympics), with his visual disability.

After chatting with Gavin, he motivated me to try out Triathlons which is his current sport. I had not run or swam in at least 20 years, but the thought of being able to compete at a professional level again motivated me to start training again.

Gavin can definitely make you believe that anything is possible because of his achievements. He helped me set Triathlon SA champs as my first goal and although it was really hard, I completed it and qualified for Africa champs. With Gavin’s guidance and coaching, I have been very motivated to train and improve myself, so much so that I’m up in the early hours of the morning to train at least 6 days a week. My sporting life and overall mindset has done a complete 360 degrees shift since getting involved in Gavin’s club and I really look forward to what I can achieve in the future now.

Why do I choose Gavin as my coach?

As the saying goes, Gavin has been there, done that and has all the T-shirts, but he is still going. Gavin has achieved numerous world level sporting awards and therefore also houses a huge knowledge base of what it takes to be the best at a top-level.

The best part of being coached by Gavin is that he understands my disability 100% and shows me what I need to do to reach the top and overcome my own constraints. Although Gavin knows the best way to coach me, he can himself easily compete and achieve excellent results competing against normal sighted athletes.

So, any athlete interested to achieve at the best of their own ability will definitely benefit from being coached by him.